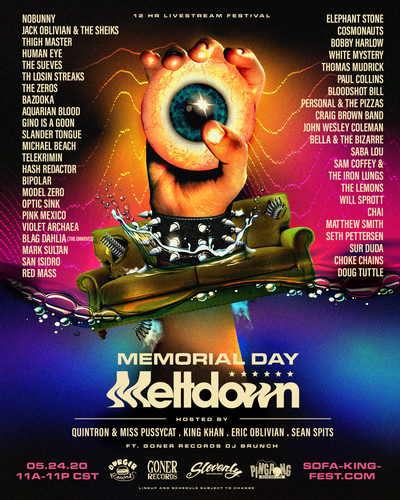 Stream it to your speakers for outside jams if you can't watch the whole thing!

Support these bands - and have a blast doing it.

PLEASE SHARE!
Brought to you by Ping Pong Booking & PR and hosted by Sofa King Fest.

Please tune in and support these great artists!
Smash that donate button on the Sofa King site to get $$$ to your favorite artists- they can use it!

Posted by ginapollard at 2:33 PM No comments:


Hi there, its been a while.
Ive been working on a new album being produced and recorded by Steve Terbecki ( White Denim, Peach Train)   at their studio called Radio Milk.   Been working on it for over a year and half now.
Its sounding great to my ears. Hoping to tour again and a lot after its done Miss the road.
I did fly out to California and did 3 shows  a month ago with Kristina Boswell ( Kay Odyssey), Julia Hungerford & the legendary Bobby May.  it was a blast. I love california weather and the vibe mannnn hahah.
Been still running my little gallery with Julia Hart .  The gallery is called Tin Whistle located in East Austin.  Anyways im ready to get pass this virus bullshit and rock out.
My paintings and songs are keeping me busy plus a little skateboarding.  Check out ,y instagram page or facebook or pics of bird paitnings ..i mainly do Oil.


Well i had some songs come out on various videos etc.. been lucky with that. Rollo & Grady got me a tune in the series Shameless on Showtime!
Got a song in Alex Knost RVCA surf video..
Got some tunes in the fabulous California Golde short film directed by Sandy Carson,  a bicycle enthusiast adventure through the sierra mountains.. shot on super 8!
Had a song on King Of The Road skate show on Vice network too!
so i had songs on surf, skate and bike videos!  radical
My little girl will turn 6 this summer. we doing alright.
anyways ill check back in later in summer .... 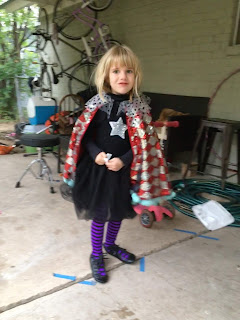 here is a review from my last record on Goliad media out of denton, Tx.


this is by Barry St. Vitus for Glide Magazine
I suspect that even the most musically exposed fan or writer would slam into a hard adobe wall trying to come up with a clear description of Coleman’s musical style. It’s a rather frustrating and challenging thing to nail down.  His PRa gives a good shot at what it’s not…”John Wesley Coleman is not an outlaw, not Americana, barely a punker and not a garage rocker.” Suggesting then …”baroque power pop basement fringe.” Works for me. If that elicits a ‘meh’ from you, then know this, this latest drop is one of several he’s done since stepping away from 15 years with Austin’s notorious Golden Boys and doing shows with such notables as Roky Erickson, the Oblivians, L7, No Bunny, the Spider Bags and Ty Segal. That helps triangulate a bit on his own personal style and music, to some degree.
What truly makes Cuckoo Bird stand out, though, is who backed up this effort and produced it, Milwaukee’s own, JAILL, led by Vinnie Kircher, also the producer. This amounts to taking your rough diamond to the best gem cutter in the area to have it cut and polished. They totally get what he’s doing and give it wings to soar high.
The mood of the album leans a tad towards melancholy and wistfulness, but is far from being a downer. The flat-out creativeness of the band color the songs enough to distract from out-and- out sadness and lift the melodies. His voice leans towards lonely, country music singer territory, but has a warming, comforting feeling, that is emotionally embracing.
The album kicks off with “Kick It Again” a catchy little ditty that, like many of the numbers, sticks in your head.  There’s simple electric piano and guitar that brings to mind a No Bunny, ‘50’s rock ‘n’ roll –flavored tune. “Weird Old World” effectively uses synthesizer and weird effects that make for an unusual sound. There’s a ”Dear Prudence” kind of thing going on in “We Speak In Charades,” starting right with the keyboards. It’s the first of quite a few songs that uses repetitive lyrics to good effect.
They get sort of an oddball thing going on mixing up a background of chimes, synth and bongos on “Another Face In the Crowd,” that meanders along, eccentrically.  “Heaven” picks up the pace with its Farfisa organ and synth leading the way and is very typical of what Wes’s songs have generally sounded like in the past. It’s a contender for Best song in the collection.
His “All Over Now’ has a sultry mood to it as it glides along with a gooey Wurlitzer organ carrying it along, and his vocals going a bit Arthur Godfrey, if you get that reference. It’s rather nostalgic and one of the more interesting tunes here, again, thanks to the creative magic of JAILL. “Feel That Way” picks things up again and goes with the repetitive lyrics thing again, but pulls you right in, as it goes a little Samba by the end.
An interesting arrangement really adds props to “Baby I like Your Style,” which are pretty much all there is to the lyrics in this one. His thing with repetitive lyrics really build up a momentum on “Without Warning” and gets it rolling, making it another of the catchiest songs. “Beam With Us,” with its piano and subtle bongos rolls out like a ballad, which uses his voice to great effect. Finally, “Out The Window” really has the baroque thing happening with its strings underneath smoothing the way. This one really is wrapped in melancholy and gloom, accented with the cello behind it, while still remaining rather lovely.
I can hardly imagine anyone not liking this album, unless they are metal-heads or only into thrash, as Wes’s originality is a strong selling point, for one thing, and the impressive playing by the band really make it compelling listening. My only bone to pick might be that I would’ve enjoyed a couple more upbeat numbers in the mix to lift it out of it’s moodiness, but, all-in-all, this Cuckoo Bird sings some pretty good songs, feathering its nest with excellent playing and production.

Posted by ginapollard at 3:17 PM No comments:

Summer is here full swing. Been playing some fun shows ..just did one with Bro Jt at Barracuda and Baby Robots , Model Zero. It was a blast! Been busy writing and making oil painting. running my art gallery on the weekends too!  GOLIAD RECORDS is putting out my next album this October. They are a rad label out of Denton. They just put out Scott Danbom's first solo album! (Centromatic alumni)
Ill be hooking up with Timmy's Organism for some dates starting Halloween.
BURGER RECORDs is putting out the tape!
the name of the album is     CUCKOO BIRD SINGS A SONG made in Milwaukee with the members of JAILL.   NYC and some West Coast dates in the works.. looking for booking agent. Ok more info soon peace everyone-jwc 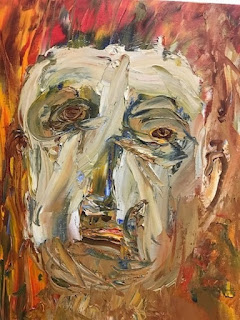 PLAYING this week 2 shows with Spider Bags. Indie Grits festival thursday and Chapel Hill friday.
12th &13th
New Record coming out after the summer is over. On Goliad Records out of Denton, Tx. Thanks Chris!
its called "Cuckoo Bird Sings A Song) produced by Vincent Kircher

and following month with Shipla Ray and Rattlesnake Milk May 30th!

about to record new material with my new players until they sick of me haha. Peace yall!

also finishing up documentary on Walter Daniels directed by me and Andy Cambell!
Posted by www.johnwesleycoleman@blogspot.com at 10:14 PM No comments: 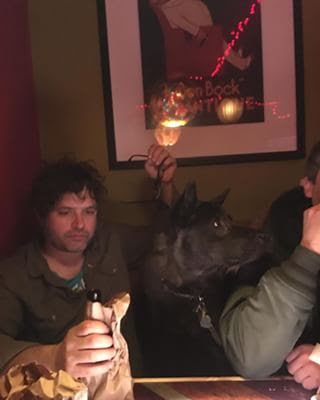 Yo hanging with the Fonz in Milwaukee in Januaray 2018. photo by Austin Dutmer
well I recorded a new record in Milwaukee last month. Vincent Kircher produced it. Members from JAILL band and friends played all over it. Im stoked for these songs. Gotta new line up band ..and we are learning them live. Looking for a record label for these tunes..  maybe its called
JWC GOES TO JAILL.. or Milwaukee Pop..or Vinnie calls it The Chicken Contender. idk.. naming an Lp is tough sometimes..    well here is a list of shows and stuff...thanks for visiting!! come see us play this year. new tunes and im hustling yard work like a mug. Plus opening an art gallery in East Austin, TX. for booking ask Zuma Booking agency or message here.

Mohawk march 2nd with other my band The Golden Boys main support for Dead Milkmen.

Playing a campaign party for Beto, Friday 3/9 at Buford's at w 6th and Rio Grande 8:30pm
(acoustic gig for Beto)

April 19th back in Austin opening for Sweet Spirit and Simon Doom. gonna be killer.

*did you hear the song i co-wrote with White Denim for their buddy Andy Pickett..its called Modern Kicks. it came out great! check it out!

or have you heard Spider Bags & Reese McHenry cover my Flower in The Dark song off her record she recorded for Sophmore Lounge? She is a great singer! thanks ya'll!
buy it here --
https://sophomorelounge.bandcamp.com/track/flower-in-the-dark

@ also sitting on almost finished record made with Andrew McCalla. all analog. all star Memphis crew. Jack Oblivian on drums! Bruce Saltmarsh too! The Sheiks! Kelley Anderson, plus more buddies from Memphis.... Dean Beadles! need to get this one done too. someday. cheers!!

Posted by www.johnwesleycoleman@blogspot.com at 9:01 PM No comments:

WFMU taping too!
^All shows starting with Chicago is with Vincent Kircher too! (JAILL solo effort)

Hello, check out my other site too www.johnwesleycoleman.com

MY NEW ALBUM DROPS JAN 27 on Super Secret Records. peace to all in this mad mad world
Posted by www.johnwesleycoleman@blogspot.com at 2:57 PM 1 comment: